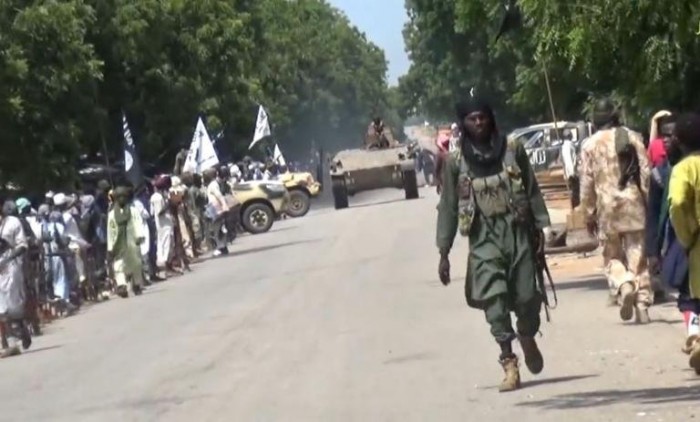 The message came as Nigeria and its neighbours met in Niger’s capital, Niamey, to discuss a regional response to the threat and Chadian troops headed to Cameroon to help repel repeated Boko Haram attacks.

“Heavy clashes” between Islamist fighters and Cameroon soldiers were reported in the far northern border village of Bonderi on Tuesday night.

Hundreds of people, if not more, are feared to have been killed in the attack on Baga, a fishing town on the shores of Lake Chad, in what could be the militants’ worst in their six-year rebellion.

The rebels burnt large parts of the town to the ground and razed at least 16 surrounding settlements, forcing tens of thousands to flee their homes, many of them into Chad and Niger.

“We killed the people of Baga. We indeed killed them, as our Lord instructed us in His Book,” Shekau said in the 35-minute message, which was posted on the video-sharing website YouTube.

The militant leader was shown speaking in front of four white pick-up trucks, with eight masked and heavily armed men.

But there was no indication of when or where the video was shot.

Survivors of the Baga attack, which also saw Boko Haram fighters capture a military base used by Nigerian, Nigerien and Chadian troops, have described how bodies still littered the streets.

Shekau dismissed the extent of the slaughter, saying: “We will not stop. This is not much. You’ll see.”

Representatives from Nigeria, Niger, Chad and Cameroon have been meeting to seek a regional response to the threat from Boko Haram because of increasing fears of cross-border raids.

Ghana’s President John Dramani Mahama has also suggested a new force, possibly under the auspices of the African Union, to crush the group.

But in the video, Shekau dismisses the threat and shows off a huge arsenal of weapons, apparently from the military base, and said Boko Haram would take on all-comers.

“The kings of Africa, you are late. I challenge you to attack me even now. I’m ready,” he said.