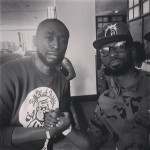 At #A3C with the homie 9th Wonder.

In business and life relationships are key. While it’s true that your net worth is often tied to your network, a man who’s already found success will tell you your friendships— solid, true and real—are even more valuable than that.

Crown Royal Black and RESPECT Magazine go inside the studio with producers Bryan-Michael Cox, Kendrick “Wyldcard” Dean and Fatin “10” Horton for a friendly reminder that whether in business or life, loyalty between brothers is priceless.

I had the pleasure of talking with hautechicago.com. Here is the article.

With eight grammy wins and some of the biggest R&B hits under his belt, Bryan Michael Cox is undoubtedly one of the greatest producers of our time. He has a distictive sound that has consistantly evolved, and changed the face of music through out the years. This creative sophistication is also very much apart of his perosnal style. We recently spoke with the mega producer about First of December and his take on fashion.

HC: How would you introduce yourself to someone who didn’t know who you are?
BC: I am Bryan (with a Y) Michael Cox…Grammy award winning producer, and songwriter.
HC: Would you consider yourself a fashion junky?
BC: YES!!!!! Absolutely! I am a fashion junky and a recovering shopaholic!
HC: How has music broadened your fashion knowledge?
BC: Music has exposed me to fashion in a more broad sense because of all of the traveling I have done for my career. I was always into whatever was popular locally, stuff like Girbuad Jeans and Jordan’s. Traveling, seeing the world has broadened my horizons, given me more individual style.
HC: Tell us a bit about firstofdecember.com
BC: I started firstofdecember.com when I was working Usher’s Raymond-vs-Raymond album. It started off as a blog, then evolved into more of a social media format… Now it is basically an outlet I use to express myself fashion wise, musically, and my everyday life… It’s basically my diary lol
HC: Looking at firstofdecember.com, I can tell that you are well versed in all things but none so prevalent as your affinity for watches. What is the new HAUTE in mens watches?
BC: Yes! I am a watch collector! I LOVE watches… If I had to pick one watch that is the hottest, I would say it’s the Rolex Yacht Master. I’m usually not a Rolex person, because the Rolex is such an expected brand to have once you get money but the Yacht Master is so versatile, you can wear it with a suit or jeans and T-shirt…it’s just a solid watch. I also am a fan of ANY Audemars Piguet watch…I am an AP FANATIC!!! You can never go wrong with Audemars.
HC: You have worked with some of the biggest artists of our generation. Have you taken any fashion cues from any of the greats (past or present)?
BC: Obviously, we borrow from the Rat Pack…the whole cleaning up nice thing lol… but we also borrow from one another…we are all looking at each other for cues. Jay-Z is looking at Puff, we are all looking at Kanye. We are all inspired by each other.
HC: What’s next for Bryan Michael Cox?
BC: What’s next for me is more music, more creating, and dissecting the business. Now that I have the formula for success as far as writing and producing, I want to work more on discovering and developing the “next big thing”.  The new Usher, Mary J Blige, or Mariah.. they are legends and no one can ever take their places, but I want to discover the next new crop.
HC: Where can our Haute Chicagoans go to stay up on everything Bryan Michael Cox?
BC: They can go to Global14.com , @bryan_m_cox on Twitter, and of course they always go tofirstofdecember.com
#theadventuresofthetexasranger BMC hautechicago.com Listen Up

Now here’s a person that I would love to sit and have a conversation with. Big up to George Lucas. Pay Attention!

George Lucas is ensuring that the force may be with young Jedis everywhere.

The “Star Wars” director will donate the $4.05 billion he will receive from the sale of Lucasfilm Ltd. to Disney to a foundation focused on education, according to the Hollywood Reporter.

On Tuesday, the Walt Disney Company announced it had paid the huge sum to acquire Lucasfilm Ltd., which produced “Star Wars” and is 100 percent owned by George Lucas himself. Disney also announced plans to release a seventh “Star Wars” film, “Star Wars: Episode VII,” in 2015.

“For 41 years, the majority of my time and money has been put into the company,” Lucas said in a statement on Wednesday. “As I start a new chapter in my life, it is gratifying that I have the opportunity to devote more time and resources to philanthropy.”

The director has yet to disclose which charity will be the beneficiary of the huge chunk of money. But Lucas currently serves as the chairman of Edutopia, a foundation that empowers innovative coursework in schools. The organization is a likely choice, eonline.com speculates.

Lucas has made other generous donations to show his commitment to education in the past. In a Giving Pledge letter from 2010, he wrote:

“I am dedicating the majority of my wealth to improving education. It is the key to the survival of the human race. We have to plan for our collective future –- and the first step begins with the social, emotional, and intellectual tools we provide to our children. As humans, our greatest tool for survival is our ability to think and to adapt – as educators, storytellers, and communicators our responsibility is to continue to do so.”

I had the pleasure of working with Planned Parenthood on the “Yes We Plan” campaign. This is a matter near and dear to my heart and I was honored when Kristi asked me to be a part of this. Mary J. Blige, Julianne Moore, and Q-Tip. DOPE!!!!

Last night ASCAP held their 4th Annual Women In Music Series here in Atlanta. They honored 2 of my good friends, Crystal Nicole (aka Cri$tyle) and Tameka “Tiny” Harris. DFMG’s own Mylah took on performance duties. She killed it. This is a really dope event. Check out some of the pics.

BMC, fresh out the studio. Lol.

So So Def’s own, Dondria.

One of the honorees, platinum singer/songwriter Crystal Nicole

One of the honorees platinum singer/songwriter, Tameka “Tiny” Harris and T.I.P.

Singer/Songwriter Meelah (formally of the group 702)

GRAMMY-winning producer/songwriter Bryan-Michael Cox was among the participants at the recent GRAMMY GPS: A Road Map For Today’s Music Pro hosted by The Recording Academy Atlanta Chapter. During the event, Cox participated in an exclusive interview with GRAMMY.com, discussing collaborating with GRAMMY winner Usher, what he learned from mentors Sean “Diddy” Combs and Jermaine Dupri and winning a GRAMMY Award, among other topics.

“To have that kind of intimacy [with Usher] and to talk about what was going on in our lives and [have] it come through in the music, I think that was my first experience really understanding that songs happen through conversation,” said Cox.

Born in Miami and raised in Houston, Cox met Dupri while attending Clark Atlanta University, which subsequently led to collaborations with artists on Dupri’s So So Def Records label, including Janet Jackson, Lil Bow Bow and Monica, among others. Cox has since co-written songs for artists such as Mary J. Blige, Chris Brown, Mariah Carey, Destiny’s Child, Alicia Keys, and Usher. In 2004 he earned his first GRAMMY nomination for Album Of The Year for his work as producer on Usher’sConfessions. He earned a second nomination for Album Of The Year in 2005 for Carey’s The Emancipation Of Mimi. His first GRAMMY Award came in 2006 for Best R&B Song for Blige’s “Be Without You.”

Cox’s other awards include multiple SESAC Songwriter of the Year honors and the organization’s Inspiration Award, and an induction into the Georgia Music Hall of Fame.

The long awaited update to Land Rover’s iconic flagship has unofficially made its debut with a completely new look that follows the edgier design language introduced in the Evoque. Still no official word yet on the new features or engine options that will be available so stay tuned to Acquire for more details as they come. Source

*Updated* Not long after the leak this morning Land Rover officially revealed the new 2013 Range Rover. The new Rover debuts with a trimmer body via its new all-aluminum monocoque body, the world’s first SUV to do so. It will also feature a new Terrain Response system, new and improved ride handling and dyanmics, and a roomier cabin with extended legroom. As for engine options, Land Rover doesn’t get too specific but mentions the availability of V8, Turbo Diesel, and Standard Diesel engine options. Expect the new Range Rover to hit showrooms in early 2013.