OK LIFERS CHECK THIS OUT, YESTERDAY I POSTED A ARTICLE THAT I GOT FROM @refinedhype ABOUT HIPHOP AND HERION,GREAT ARTICLE THAT I FELT THIS COMMUNITY OF PEOPLE WHO READ AND TALK ABOUT ISSUES NEEDED TO SEE,JUST AS IM DOING NOW I GAVE THE WRITER HIS CREDIT BUT DIDN’T PUT A LINK TO THE SITE, AND NEXT THING I KNOW I SEE THIS ON TWITTER 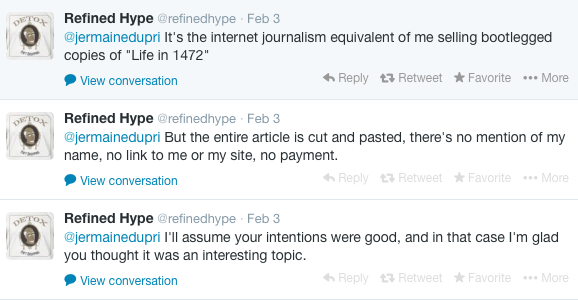 THE ONE POWER POINT OF GLOBAL14 TO ME IS MY BLOG,NO ONE POST FOR ME,NO ONE TELLS ME WHAT TO POST AND MY LIFERS NO ITS MY PERSONAL THING,THIS IS HOW IT READ ON TWITTER AND THATS WHAT MAKES HIM ACCUSING ME OF NOT GIVING CREDIT REALLY FUCKED UP

BUT THEN I WAKE UP TODAY AND SEE THIS,AND THE NIGGA TRIED TO SAY IM OLD AND DONT KNOW WHAT IM DOING LOL!!!

Yesterday I wrote an article about heroin and hip-hop. It wasn’t particularly amazing or well-thought out or groundbreaking. Frankly, it was one of those articles that seemed destined to come and go. When you write as much as I write, you’re going to have a certain amount of “oh yeah, I did write that one time” posts that you’re not particulay proud or ashamed of, but just are.And then, as happens so often in my life, Jermaine Dupri got involved:My first step was to check to see if that was the actual So So Def CEO, “Welcome to Atlanta”, Lil Bow Wow inventor, married to Janet Jackson, Jermaine Dupri. Yep, as much as a verified Twitter mark means it’s the “real” person, that was the real Jermaine Dupri. And the real Jermaine Dupri tweeted out my article? The interwebs are a strange and glorious place.
And then I actually clicked that link in the tweet. Oh…this really got out of hand fast.For a moment I thought that Jermaine Dupri had mistakenly linked to someone else who had copied and pasted my article, but then I realized the person who posted it was named JD. And then I realized in his Twitter bio he says he’s the CEO of Global14.com, the site that my stolen article’s on, and then I realized holy sweet baby jesus the guy who I used to watch on MTV just personally stole my article.

For a solid hour I didn’t really know what to do, what’s the protocol here? What do you do when a millionaire producer copies and pastes your article about heroin onto a site that looks like it was designed in the GeoCities era? So…I don’t know, maybe I’ll respond via Twitter?

Well, now I’m just confused. It would appear that Jermaine Dupri has no idea why literally taking my article word for word, picture for picture, link for link, would be a problem. Maybe JD doesn’t know how the internet works? It’s a possibility; after all, he is 41-years-old. Judging by Global14.com’s site design, he might still be using AOL for his email. And I’m joking, but I’m also serious. Maybe, just maybe, he genuinely has no idea what he did. So I took a more educational tact:

On one level this whole…whatever it is…is just a funny and ridiculous story that could only happen in the age of the internet. But on a deeper level, it’s a true sign of the times. At the risk of complaining about my ridiculously awesome job (which includes writing articles about that time Jermaine Dupri stole my article), if musicians think they have it hard, they should try being a writer who covers music. If someone’s going to steal your music and re-post it somewhere else, at least they have to go through the minor inconvenience of downloading and then re-uploading. By contrast, just wholesale taking an entire article is as easy as hitting control c, control v on your keyboard. It’s so easy that, apparently, someone with only a rudimentary understanding of technology can do it.

But beyond the mechanics, it also speaks to how little writing, and a lot of creative work, is valued in 2014. I won’t pretend like this was some Pulitzer article I poured my heart and soul into, but still it was MY WORK, and for better or worse, I guarantee no one else has written something like it. It was my idea, my effort, mine.

More importantly, I don’t have another job. This is literally how I feed my family. Every time someone visits RefinedHype I make money. If I write pieces that are interesting and original enough that people feel compelled to read them, I get to pay my rent and pay for my daughter’s health insurance and buy more Scotch and take my wife out on date nights. So when someone, like say this guy, takes my article and places it somewhere I don’t make any money off of it, without my permission, they’re literally taking food off my family’s plates.

That’s the simple truth, but it’s not a truth that the general public seems to understand and/or actively avoids acknowledging. “It’s just something some blogger wrote, it’s not like they actually did something.” It’s an attitude that goes far beyond writing, and much of the recent history of the internet is the history of artists trying to value their work while also juggling the unescapable reality of how fluid and accessible that work is online.

In that same spirit though, if a rapper were to have their song leaked – and I tried to make that parallel to JD in my Twitter reply – as frustrating as it would be, I wouldn’t advise them to get their Jim Harbaugh on and start issuing take down demands. I’d say that the same flexible technology that took your work is flexible enough to allow you flip that theft to your advantage.

So yes, while I would have preferred if JD had simply linked to my RefinedHype article in the first place, look what’s come out of it? I’ve got this brand new article, I’ve got a chance to kick off a discussion about the value of “content” in 2014, and I get a hilarious story about that one time Jermaine Dupri stole my article about heroin. There’s a part of me that’s furious about it, but on the whole I consider this a pretty good 24 hours for me.