Beyonce extravagant wardrobe for tours gives a tough competition to her singing skills on stage. As her foot-tapping songs and albums rise up the charts, Beyoncé rapidly climbs up the fashion ladder too with custom-made Atelier Versace outfits for her Mrs. Carter World Tour.

Beyonce made a stunning appearance in Glasgow, UK clad in a dazzling white and silver Versace mini-dress. She kicked off the European leg of her international tour by performing in this halter neck short outfit which was decked with white sequins, leather straps and sculpted metal beads too.

On her way out, she ended the rocking performance, dressed in a black leather racerback top which was complemented with a mini skirt. Versace jazzed up this look with a transparent overlay that was embellished with a grid of Swarovski crystals.

Until now, Versace has been associated with Lady Gaga for designing costumes for her world tour. However this is the first time the Italian label has created one-off looks inspired by some of the record’s more popular songs for Queen Bey. In between the glamorous closing and opening event, she also rocked the stage with a studded plaid shirt and leather shorts by Givenchy’s Ricardo Tisci. 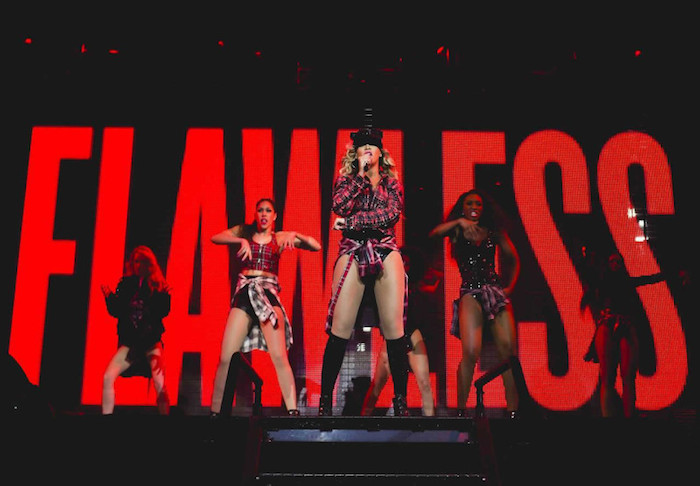 Beyonce Mrs. Carter Show World Tour is the fifth concert tour by Beyoncé which kicked off on April 15, 2013 and is scheduled to run until March 27 of this year.