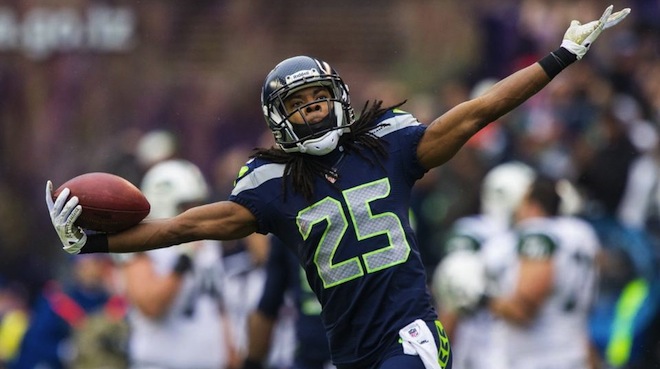 Is Richard Sherman a reckless trash talker or an entertainer? I think theSeattle Seahawk cornerback is an entertainer who knows how to use trash talk just as comedian Sarah Silverman understands the shock value of being a potty mouth.

Much as been said already about the self-aggrandizing interview that Sherman conducted with Erin Andrews of Fox Sports seconds after Sherman’s Seattle Seahawks had defeated the San Francisco 49ers in the January 19 NFC Championship game. The social media world exploded with predictable reactions of shock and awe from fans who heard Sherman on national TV proclaim himself to be the best cornerback in the game after making a game-saving play. Tommy Tomilson of Forbes wrote a thoughtful reaction that touched upon issues of race, hypocrisy, and media saturation of sports.

To be sure, Sherman made his comments in the heat of the moment, apparently in the aftermath of a trash-talking duel with 49ers wide receiver Michael Crabtree. And let’s not forget that football is an emotional game, even at the professional level. In our quest to get on the field with the players and capture their instant reactions to a highly emotional event, we’re going to sometimes see and hear these kinds of raw moments. We would have witnessed more trash talk decades ago had the NFL been subjected to this kind of saturation coverage then. (Remember Brian Bosworth? Hollywood Henderson?)

But the NFL is also big entertainment as well as a sport, and players are entertainers. The NFL increasingly competes with a blizzard of white noise to grab a sliver of attention from our multi-tasking brains. The NFL has responded by turning competition into an increasingly loud and immersive experience, online and offline. Deion Sanders saw what the game was becoming when he created the persona that earned him his “Prime Time” nickname.

on social media, including mocking Tom Brady of the Patriots on Twitter and feuding with cornerback Darrelle Revis on Twitter and in the streets of New Orleans during the 2013 Super Bowl. Controversy and self-aggrandizement are part of his shtick. Sherman, who has a degree in communication from Stanford, knows what he’s doing — and so does any journalist who sticks a microphone in his face, including Erin Andrews.

While many self-appointed pundits debate whether what kind of sportsman he is, you can be sure both the NFL and Fox are focusing on another question in the run-up to Super Bowl XLVII: is Richard Sherman is good for ratings.