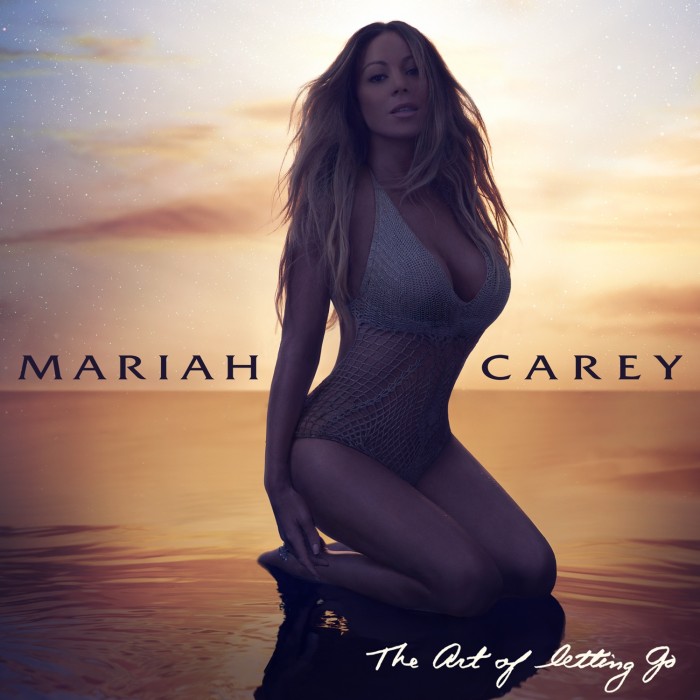 Mariah Carey plays with a lump of lavender clay in New York City on Sunday, one day before she premieres “The Art of Letting Go” during a listening party on Facebook.

The five-time Grammy winner is using the clay as a form of physical therapy; she had dislocated her shoulder, experienced nerve damage and fractured a rib in July at a video shoot for “#Beautiful.” The injuries required her to wear arm slings, until now.

“Finally the sling is gone,” Carey tells Mashable. “I was like, ‘If I have to take one more picture with the bling sling, I don’t know what I’m going to do — it’s not POW!”

Despite still recovering, Carey is ready to debut “The Art of Letting Go” song at 11 a.m. ET on Monday to her 14 million Facebook fans, which she describes as her “Lambily” because her fans are called “Lambs.” The listening party will include a Q&A.

“Facebook is global, and I always have to keep in mind that my fans are all over the world,” Carey emphasizes. “I wanted to make sure everybody was able to hear the song at the same time. To interact with the fans while they’re listening to the song for the first time, it makes me happy. I like to see what my true fans are feeling. … And I know this is a song that is from my heart, completely. It’s a real moment for me, dahhhling.”

What Does the New Song and Album Sound Like?

“The Art of Letting Go” is the title track from Carey’s upcoming 14th studio album. It’s a soaring ballad — with lyrics most anyone will find relatable — that shows off the hallmark range she’s demonstrated since her first album arrived in 1990. Mashable got to listen to the song twice before Monday’s Facebook premiere.

Carey says this song is about the “ability to let go of things, people, emotions, situations, anything that has bogged you down for a long time.”

“I like to leave things very ambiguous so my fans can interpret the songs in the way that they choose to, and that’s why I never really say, ‘Well this happened to me,” she says.

“Sometimes it’s a true story, every single word of the song, and maybe this one is, too, but you’ll never know.”

“Sometimes it’s a true story, every single word of the song, and maybe this one is, too, but you’ll never know.”

Rodney Jerkins produced the song, and Carey’s new manager and longtime friend, Jermaine Dupri, chose to release “The Art of the Letting Go” as the next song because he says it has a message fans need to hear and take to heart. “They’ll understand the direction of the album with this song,” he hints, describing the ballad as “the 2014 version of ‘Vision of Love.'”

Carey admits “it’s certainly not an exact replica of ‘Vision of Love,'” but she did say it has the similar starkness and not-overproduced feel of the demo of “Vision of Love.”

“I really hope the fans like this, and I hope they’re in a place where they can listen to the bottom end, the bass and the different parts of my voice,” she says. “Sometimes when we just listen on our computers, you lose the low end of the record.”

Carey wants fans to pay close attention to one particular part in the song.

“They have to listen very closely to the lyrics, especially the last two lines of the second verse,”

“They have to listen very closely to the lyrics, especially the last two lines of the second verse,” Carey notes.

“I would like to have people apply that to their lives in any way they see fit. And that’s why I wrote it. It was an organic moment that happened to also be timely and very real. There couldn’t be a more real moment in my life for that line on this actual day — for reasons we won’t get into. But to sum it up, it’s about helping someone else get through their moment, while I’m getting through mine as the writer and the performer.”

When asked whether she can give details for her upcoming album, Carey stayed mum.

“I can not. No, I mean, look. The problem is this: I really don’t want to reveal things until I know the exact date for the album,” Carey says.

Dupri, however, gave another slight hint, taking into account input on social media.

“I believe this record sets the tone for her fans, and I want them to understand that we pay attention to everything that they say and everything they send us online because the artists really care about the relationship with them,” Dupri says.

Dupri, who previously teamed up with Carey on 2005’s “We Belong Together,”conceptualized the Facebook listening party, and as Carey’s new manager since October, he quickly got her on board with the Facebook partnership.

“What we’re doing is actually giving music directly to Facebook,” Dupri tells Mashable by phone. “Most artists upload their music to Facebook using SoundCloud, YouTub and Vevo, but we are the first that are giving the music through the Facebook player.”

Musicians such as Jay Z (“Holy Grail“) and Bruno Mars (““Gorilla“) have premiered music videos via Facebook’s video feature, but Carey is debuting only audio.

He and Carey are excited to see the instant feedback from Facebook users, though, Dupri points out that this “exercise” isn’t a ploy against traditional distribution routes.

“I don’t want people to think this is to avoid radio or any regular outlet; this is an exercise to do something that none of those other outlets can do, basically,” Dupri adds.

Carey agrees: “The global aspect and the immediate access and ability to interact with my fans during the song premiere are the main reasons we’re doing this. The fact that Facebook is global, that is super important to me.”